There’s nothing better than hopping in a shower after a day on the road or exploring the wilderness. Unfortunately, some RVs don’t include good shower heads, if they even have one at all. If you’re looking to upgrade your RV bathroom, a replacement shower head is a good idea.

Today, I find the best RV shower heads that you can install. I’ll also walk you through all the features to look for when choosing the best option for you.

Upgrade Your RV Bathroom with These Shower Heads

Reviews of the 6 Best Shower Heads for Your RV

Now that we’ve had a quick overview, it’s time for some details. Here is all you should know about my top picks for the best RV shower heads.

The PIH high-pressure shower head is a fantastic pick if you like a flexible hose with a considerable reach. Included with the unit is a long 59-inch hose, giving you a great range in the average-sized RV shower.

What I also like is that the shower head instantly amplifies the flow pressure as the water runs through. It delivers a steady stream, which might even make you forget that you’re showering in a motorhome.

Another benefit of the PIH is the different settings. You can choose between a powerful shooting mode, pulse massage, and pause. The pause option is particularly useful when in an RV as it allows you to stop the stream to save water.

With that said, it doesn’t have a vacuum break, meaning that when you pause, all the water remains inside the hose. Once you turn off the water, release the pause button to allow the water to drain. 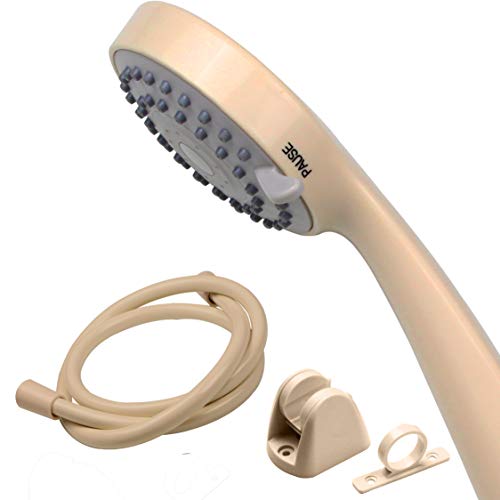 We all know that when traveling in an RV, water conservation is a must. Homelody includes a water-saving button, similar to the PIH above, enabling you to halt the flow while you shampoo.

You can also switch between five settings, including a gentle rinse, spray, power flush, centralized stream, and shower.

For the spout, you have silicone material, which is eco-friendly and resists stains. The unit itself consists of chrome-plated ABS plastic that’s effortless to wipe clean.

Installing it is relatively straightforward, too, although please note that Homelody doesn’t include the hose in the package, so you have to purchase it separately. However, it claims that the unit should fit any shower arm.

One thing I didn’t like is that the pause button can get stuck, requiring you to pry it up again. Another potential drawback is that the shower head is quite small, limiting the coverage. 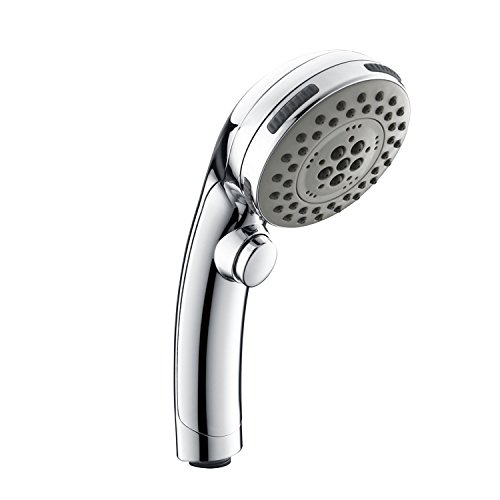 If you prefer having a fixed shower head, I recommend the Aqua Elegante.

When choosing a stationary shower head, durability is a must, and I have to say, this option is impressive. It consists of a thick layer of ABS thermoplastic, BPA-free resin, making it resistant to corrosion, rust, and rough handling.

Like the Homelody above, the Aqua Elegante comes with a silicone spout that’s resistant to mineral build-up and clogging.

Be aware that it isn’t for sale in California as it exceeds the 1.8 GPM—gallon per minute—water flow restriction.

However, the flow isn’t the best, especially if you already have low pressure. The unit doesn’t amplify the stream, rather it somewhat changes the pattern, but it doesn’t make it particularly ‘fuller’ on your skin.

It also doesn’t offer any settings, making it less versatile than the options above. 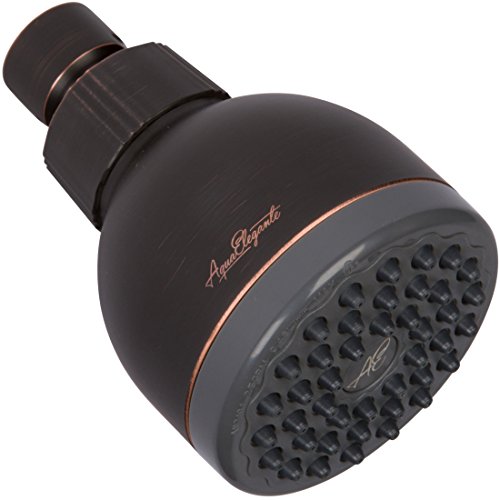 If you’re on a budget, I suggest the Camco RV shower head. For its price, it offers excellent good-to-have features. The handheld shower head measures 4 inches in diameter with a 9-inch length. You have rubber tips on the spout, which aren’t as easy to clean as silicone but still worth it for the price.

Like the PIH and Homelody, it includes a pause switch, which saves water. There are also five spray patterns to choose from, including a drenching rain or massage mode.

Unfortunately, it seems that the pause button isn’t durable and may get stuck quickly. The switch is also hard to operate, which isn’t ideal if you have arthritis or similar conditions. 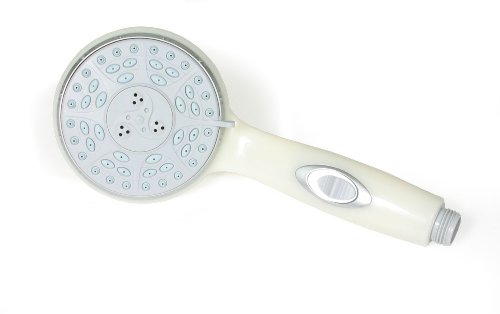 If you want some luxury while away from home, the brushed nickel shower head from Oxygenics is where to look.

It comes with its patented Oxygenics amplifying technology that “increases” the existing water pressure while widening the coverage. Despite the added volume, it minimizes water waste, excellent for an RV tank.

The shower head provides a particular spray pattern, which increases the efficiency of your shower, making it quicker to rinse off shampoo and soap. It also enables you to limit the stream while you lather up using its SmartPause valve.

Inside the unit, there are non-stick parts that prevent clogging and mineral build-up. Included in the package are also a 60-inch hose, plumber’s tape, and a wall-mount holder.

With that said, the shower head doesn’t pause the stream entirely and may alter the temperature once you open it again. It’s also quite heavy compared to the others, weighing approximately 1.4 pounds. 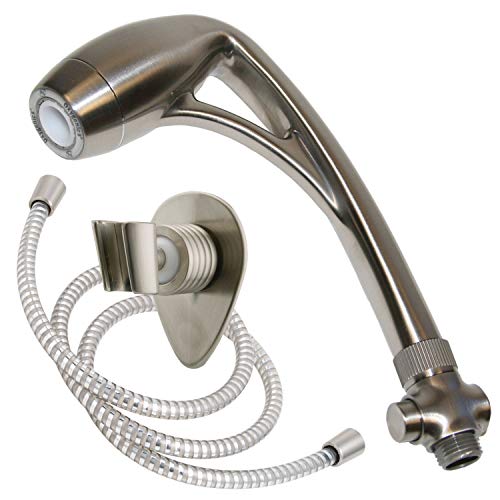 The large surface of the rainfall spout will drench your whole body in one go. For the handheld head, you have a flow-control button that’s conveniently located so you can use it with your thumb.

With the handheld part, you can alter the pattern to aeration massage, high-power rain, and a waterfall setting. I also like that it’s easy to install—you don’t need any tools—as the shower head connects with any standard shower arm.

In saying this, it isn’t as durable as hoped, seeing that the plastic finishes may leak and the metal construction rust. The handheld head also gets clogged easily, causing water to spray in an inconsistent pattern. 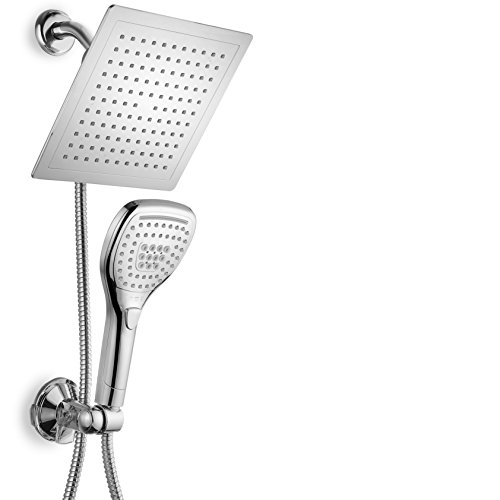 Buying a New RV Shower Head: What to Look For

Finding the best RV shower heads isn’t always as straightforward as it may seem. Showers are notorious for draining the onboard water tank, so you need some special features. Here are a few things worth considering:

Because water efficiency is key in RVing, you need a shower head with a water-saving feature.

A shut-off valve enables you to pause the flow, giving you time to lather shampoo and soap without wasting water.

However, although this will pause the stream, not all can completely stop it, and a slight trickle might still escape.

If there’s no pause function, consider the shower head’s GPM rating, which indicates how many gallons per minute it releases. This should ideally be as low as possible—at least below 2 GPM to be water-saving.

Unfortunately, manufacturers don’t always disclose this, so you may need to check the reviews to get an idea of the flow.

Standard shower heads included in RVs tend to lack in terms of performance. They usually have mediocre pressure and rarely offer any spray settings.

Modern shower heads come with comfort features, like massage modes, high-power rinse, and even rainfall features. These help make your shower experience more pleasant while away from home, which we all need sometimes.

Because the GPM is low, the shower head should include a feature that amplifies the flow. Units that have this usually add air to the water, giving it a “fuller” sensation as if the pressure was higher.

Ergonomics and simplicity are two essential factors to consider, particularly in an RV where convenience is already compromised.

It’s best to find a shower head that’s easy to install and use as this makes your experience undoubtedly better.

Low-quality shower heads won’t last many trips, and having it break while away from home is a no-go. Instead, opt for quality units—they may be pricier upfront but will be cheaper over time.

Clogs and mineral build-ups can impact the flow and quality of your water. The best RV shower heads should include silicone spouts or tips as these are easy to clean and will prevent minerals from getting stuck.

For more plumbing and bathroom setup tips, read Brian’s guide on understanding your RV water system and our guide on the best RV outdoor shower enclosures.

Why Do RV Shower Heads Leak?

The reason most RV shower heads leak is because the pressure fitting between the pipe and the shower head itself is plastic. Your shower head at home doesn’t really leak because metals are often much better for the pressures that occur when you turn on the shower. One of the best ways to fix a leaky shower head is to remove it, make sure it is clean and then wrap the threads of the pipe with teflon tape. This creates a better seal and often will stop the annoying leaks you can experience in your RV shower.

How Many GPM Does My RV Shower Use?

Unless you have an ultra-high pressure system, generally 1.5-2.5 gallons per minute. This is slightly less than what you might get at home but is more than ample to shower and get thoroughly clean. You can also choose a shower head to help maximize pressure given your water flow rate to get a little bit more comfortable of a shower.

How Long Can You Shower In An RV?