The battery and electrical system of any RV camper or overland van are some of the most critical components you have to keep in mind when outfitting your vehicle. The difference between choosing the right battery for your lifestyle and the wrong one can be catastrophic further on down the road.

Although there are many competing deep cycle batteries out there vying for your well-earned dollars, we have decided to take a look at a popular model that will appeal to a broad spectrum of RVers: the Battle Born LiFePO4 deep cycle battery. Let’s see what this battery has to offer!

First of all, the battery’s basic electrical figures:

This battery was designed and assembled in Reno, NV, by Battle Born Batteries, a highly-esteemed outfit. Something special about this LiFePO4 battery is that it comes with a “BMS” or battery management system. The BMS acts as a power regulator that shuts-off against some causes of failure like temperature fluctuation and ground faults.

Along with the BMS security system, you can mount this battery wherever you need it due to its Lithium-Ion technology. Such flexibility makes this model ideal for RV campers, off-grid uses, or boats.

At 31 lbs, the Battle Born boasts one of the sleekest, lightest Lithium-ion bodies on the market for its voltage. Besides its appearance, you’ll see this battery useful in many systems, from 12, 24, 36, to 48-volt. That makes it a truly versatile battery.

You also don’t need to worry about this battery generating hydrogen gasses indoors, thus becoming more versatile for users who want to mount it in a cabin or in a location where less cable length is needed.

Finally, the lifetime cost per Ah in this battery is roughly 10% of a comparable lead-acid model price. Just to add to that, this model predictably lasts up to 3000 cycles.

I have been a big fan of Battle Born for a while now. I’ve found their products to be impeccably assembled, lighter than other comparable batteries, and sleek in design. Their LiFePO4 is no different.

I bought three to replace my 110Ah batteries—I instantly lost 200lbs on my RV. The BMS management system also went into my decision to purchase the BMS system. BMS works by disconnecting loads if it senses voltage in a cell falling below a minimum amount. The added security from the BMS has lessened my anxiety about safety.

It’s hard to overstate how much you’ll notice your battery’s weight until you purchase a lightweight model like the Battle Born. At 31 lbs, I can now lift and mount the batteries higher on my vehicle, thus reducing cord length, voltage drop, and power loss.

For all customers who might not be satisfied with their battery, Battle Born includes an industry-leading ten-year warranty. Not only do they design batteries, but they’re a trustworthy company too!

The Battle Born LiFePO4 Deep Cycle Battery is one of my picks for the best RV battery.

My primary issue with the Battle Born is its price. Over $900, it’s safe to say that this battery is a premium piece of equipment. The price will scare some people away, that’s for sure. Other LiFePO4 deep cycle batteries from AIMS Power and Ampere Time are available at about $150 cheaper with the same voltage for less.

The price is comparatively high, but I wouldn’t say this battery isn’t cost-effective. I charge it frequently while still retaining up to 80% of its original capacity.

Reviews From Other RVers

The RV, marine, and off-road community is full of engaged and opinionated voices! It’s always great to read the reviews of my fellow campers online. Reviews on the Battle Born LiFePO4 Deep Cycle battery were no less enthusiastic. Here’s some of what I read: 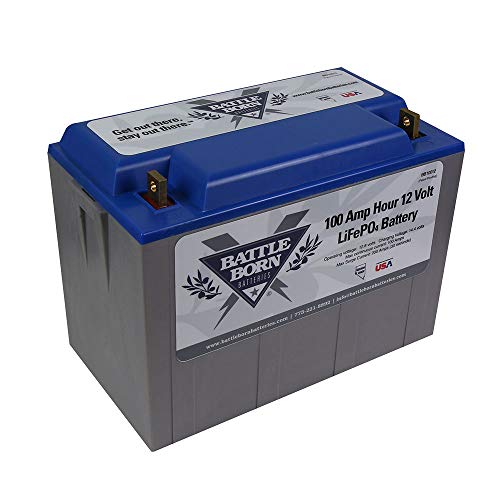 All in all, the deep cycle battery offered by Battle Born places it in the “must buy” category for serious RV campers, off-the-grid users, and boaters. Its weight to voltage ratio is hard to beat, and the extra security you get with the BMS system reduces some of the anxiety that comes with owning LiFePO4 batteries.

If you have the budget space to invest in this battery, I think it’s a smart decision to cut the check. By adding one or two of these top-shelf batteries to your inventory, you take a step up from being an amateur enthusiast and join the ranks of serious battery users. Welcome to the club!